Another robot? At robot developer inaho they understand only too well that this could be a grower’s first reaction after the recent series of robot introductions. Nevertheless, they ask growers to come and have a look at their tomato-picking robot in Tomatoworld in Honselersdijk, especially since it is a harvesting robot for snack tomatoes. There are very few of these worldwide, while harvesting the small red tomatoes is extremely labor-intensive. 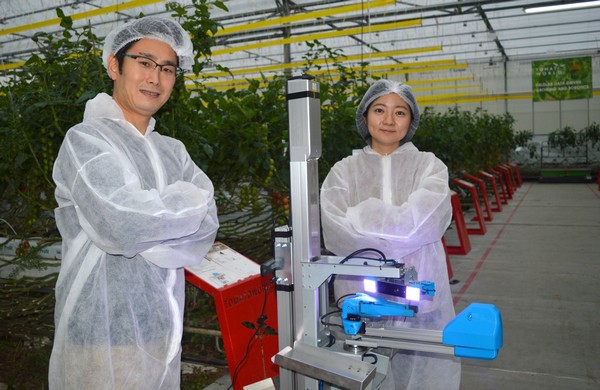 Takahito Shimizu and Kaede Morita of inaho next to their tomato harvesting robot at Tomatoworld.

With one battery charge and the help of one operator, the robot can pick for twelve hours.

However, the arrival in the Dutch greenhouse is still “a very important step,” explained Managing Director Takahito Shimitzu during a visit to the robot at Tomatoworld. “Here we find a much larger market for our robots than in Japan. Besides, this market features completely different requirements than Japanese growers place on our robots.” 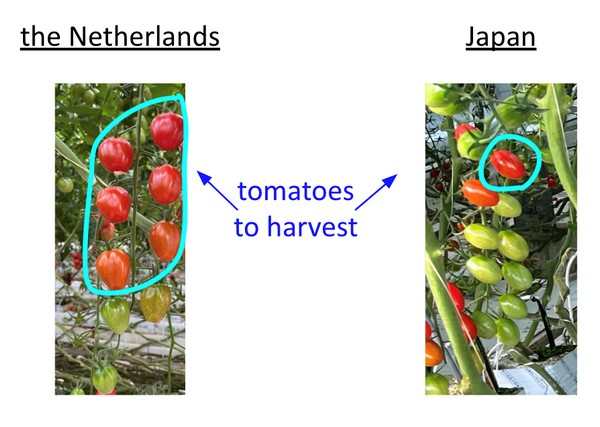 Growers in the Netherlands pick a tomato faster than in Japan. There, only the very ripest tomatoes are harvested.

Takahito: “The way of harvesting snack tomatoes here is quite different from Japan. Where growers in Japan go around all rows daily and only pick the ripest tomatoes, growers in the Netherlands also pick fruits that are not as red yet, which is possible because they have better storage techniques. As a result, they don’t have to go around all the rows every day. It requires different things from our robot.” 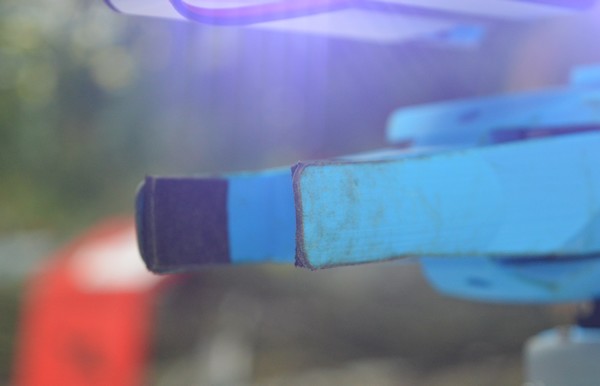 A major focus of the robot’s development now is the ‘gripper hand’.

Gripper
Very specifically, Takahito and Kaede Morita, Business Development Manager, already know that the “gripper,” the robot’s artificial robotic hand, will have to be modified. That gripper now grabs the tomatoes, after detecting them by color and size, and then “turns” them loose with a quarter turn. “Improving the gripper is our main concern at the moment,” Takahito mentions. “After the update, which is currently being worked on in Japan, we expect the robot to be a lot more competitive against the pickers in a Dutch situation by next year already.” 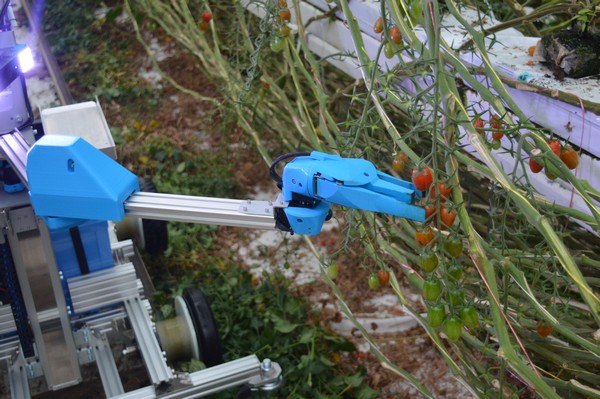 As soon as the robot sees a ripe tomato, the grasping hand shoots in that direction. By making a quarter turn, the robot ‘picks’ the snack tomatoes from the bunch.

So far, inaho expects a minimum labor saving of 16% when using the robot. These are figures based on what is already known from Japan. Kaede shows by means of a calculation that, with what is known about the situation in the Netherlands, saving costs on labor could be as much as €200,000 per 10 hectares. The robot would pick about 30 to 40% of the tomatoes, and people do the rest. “But we expect to achieve greater labor savings, certainly in the Dutch situation.”

Man teaches robot to pick
The first tests at Tomatoworld already provided the robot developers with a lot of valuable information. The fact that many different varieties can be found in this greenhouse is an advantage. The robot can first drive through a path with a well-known reference variety in European snack tomato cultivation, and then through a path with a variety without a name, with only a number. 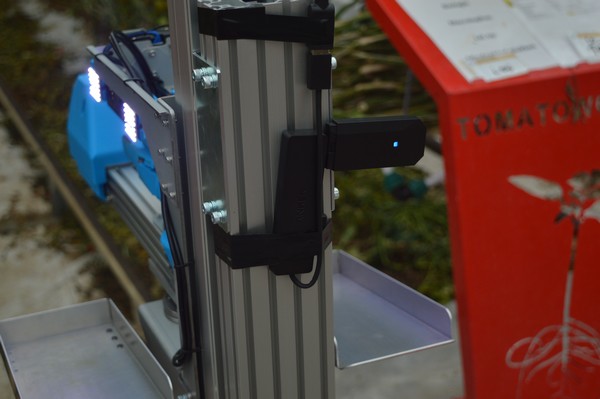 A SIM card is used to connect to the internet

Kaede points out that it is easier for the robot in this second row, because, from the robot’s point of view, the tomatoes are more favorably positioned on the truss. Takahito: “The robot still has trouble with stems and leaves when identifying the tomatoes. The robot does not need self-learning software for this; we continuously adjust the software based on our findings.” 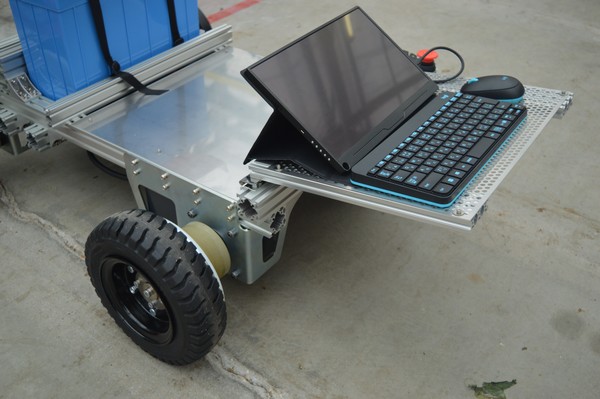 The robot can run on either tube rails, as in Tomatoworld, or on tires. Inside the robot, here behind the large rubber wheel, is a computer. The laptop allows for quick adjustments when testing.

If it is up to inaho Europe, more snack tomato growers will add their findings soon. Takahito: “As long as the plants are still in the Tomatoworld greenhouse, we’ll keep testing here. There have also been viewers, although both coronavirus and tomato viruses make visits difficult.”

Additional requirements?
In April, testing at Tomatoworld will continue with the new crop. Takahito: “By then, we also expect a major update and hope to have found a grower who wants to test the robot in their greenhouse. In this way, we also want to find out what the specific wishes of growers are. Do they need data collection by our robot, for example, at night and in the weekend when the robot is driving in the greenhouse anyway and no people are present? Does that have value for Dutch growers? We do not know and would like to hear such things. Of course, in case of cooperation, we can also discuss additional benefits for the grower who wants to help us further.”

Want to check out the robot? Fill in this form and get in contact with inaho: https://forms.gle/298cnnxfU2SMcXke7.